Ask an International Guy of Mystery

Dear Guy,
I've been reading Wallace Stegner's Wolf Willow, an autobiography tracing paths of his early life near Whitemud, Saskatchewan, Canada. It's a story about the landscape and history of the opening of the West. Do you know if Stegner ever asked his students (Edward Abbey, Wendell Berry, Ken Kesey, Sandra Day O'Connor and others) this question: "If a chicken-and-a-half lays an egg-and-a-half in a day-and-a-half, how many eggs will nine chickens lay in ten days?"
And what if he did: would you?
Joe Yak from East of Tomales

Dear Joe,
It was actually Stegner's student (Ken Kesey) who posed this question to another of the students you mention (Sandra Day O'Connor) to determine whether or not she could board the Magic Bus called Further. Her answer not only allowed her to ride the bus but has since been cited as a defining moment in Westward Expansion. Coincidentally, the bus driver (Neal Cassady) was asked by Kesey why he married a chicken, and Cassady replied, "Because I had to."
Would I? I think I'll brood on that for a while.
Guy 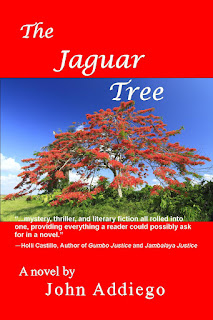 "Spell-binding! The Jaguar Tree is a splendid novel!"
Ernest Hemingway*